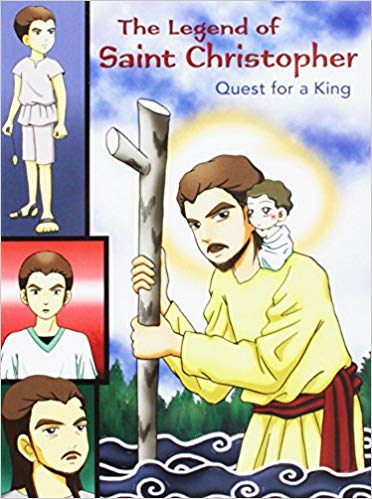 Saint Christopher was known as a giant among his peers and wanted to use his strength to serve only the greatest king he could find. Leaving home, he searched far and wide, taking many wrong paths and pledging his allegiance to several false leaders. Eventually Christopher starts to change, making a new life for himself assisting travelers wishing to cross the river. He meets a great challenge one day when, despite his great size and strength, he is almost unable to carry a very small baby who is astonishingly heavy. Discover what St. Christopher found when he reached the other side of the river with his tiny passenger, and see why he is called the patron saint of travelers and a model for us all.

Based on elements of the Golden Legend compiled by Blessed Jacobus de Varagine, a Dominican bishop in the 13th century, author and illustrator Lee Hyoun-ju masterfully adapts the legendary story of Saint Christopher, telling it in dramatic detail with action-packed Shounen-style images in this graphic novel for children ages 9 to 12.

Be the first to review “Legend of St. Christopher” Cancel reply