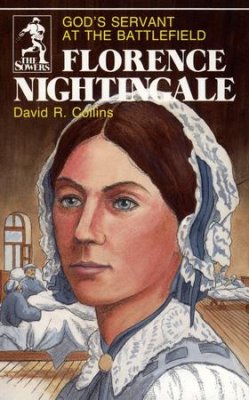 Florence went against the wishes of her wealthy parents and defied social custom when she took up a career that no respectable woman of that day would even consider. She became a nurse. History knows her now as “The Lady with the Lamp.” Night after night she walked among the cots of wounded soldiers, carrying her kerosene lamp to light the darkness and wearing her cape to keep out the cold. She was always ready to bandage the wounds of a bleeding soldier, give a drink of water to a thirsty patient, or write a letter home for a private on his deathbed. Up until Florence’s time, the hospitals in England were a disgrace. Could she better conditions? She would have to overcome the resistance of high officials, the apathy of the public, and even the ignorance of doctors. Throughout her life, Florence remembered the entry in her diary when she was still a girl: “God spoke to me and called me to His service.” For ages 9 to 13.