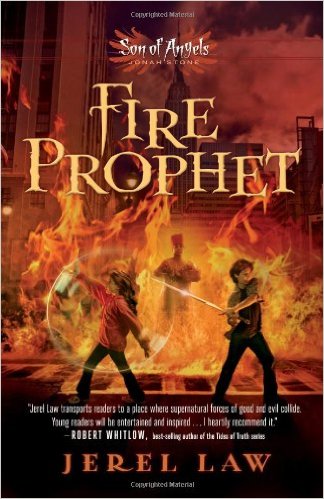 “Jerel Law transports readers to a place where supernatural forces of good and evil collide. Young readers will be entertained and inspired . . . I heartily recommend it.” —Robert Whitlow, bestselling author of the Tides of Truth series

What if you could actually see angels and fallen angels engaging in battle—and you were expected to join the fight?

It’s been one year since Jonah Stone and his sister, Eliza, discovered that their mother is a nephilim, the product of a union between a human and a fallen angel, which makes them and their little brother, Jeremiah, quarterlings, or one-quarter angel. After embarking on an epic journey to rescue their mother and the other nephilim, who were kidnapped by fallen angels, the Stone kids have enjoyed a little peace and quiet.

But when Jonah and Eliza are attacked by fallen angels at school, they learn that quarterlings all over the world are being targeted, and separating them from their parents is the only way to keep them safe. The kids undergo special training to help them discover their own unique angelic gifts, which come in handy when they embark on a mission to find a mysterious prophet who they believe holds the key to Abaddon’s defeat in a massive battle between good and evil.

Parents today are looking for fiction that makes Christianity and the Bible exciting for their kids. This series is the first Christian answer to Percy Jackson and the Olympians, the Kane Chronicles, the Secret Series, and other middle grade series packed with adventure, action, and supernatural fights. But the message is solidly scriptural in that God alone is always in control.

“Jerel Law has crafted a fantastic story that will leave every reader wanting more. Stop looking for the next great read in fantasy fiction for young readers—you’ve found it!” —Robert Liparulo, bestselling author of Dreamhouse Kings and The 13th Tribe